https://rulingrobotfalcons.com/
Donate to The Bee Byway

We are The Ruling Robot Falcons, a FIRST LEGO League team who has been competing for 7 years. FIRST is an organization designed with the purpose of giving kids an opportunity to make a difference in the world and teaching them that they have the ability to solve real world problems. In December, we won the VA/DC State Championship and will be competing in the world championship in April.

We have been researching and working on the important issue of native bee decline for 3 years. The Bee Byway is a result of a lot of research, meeting with experts, and solutions that didn’t really work to solve the problem. 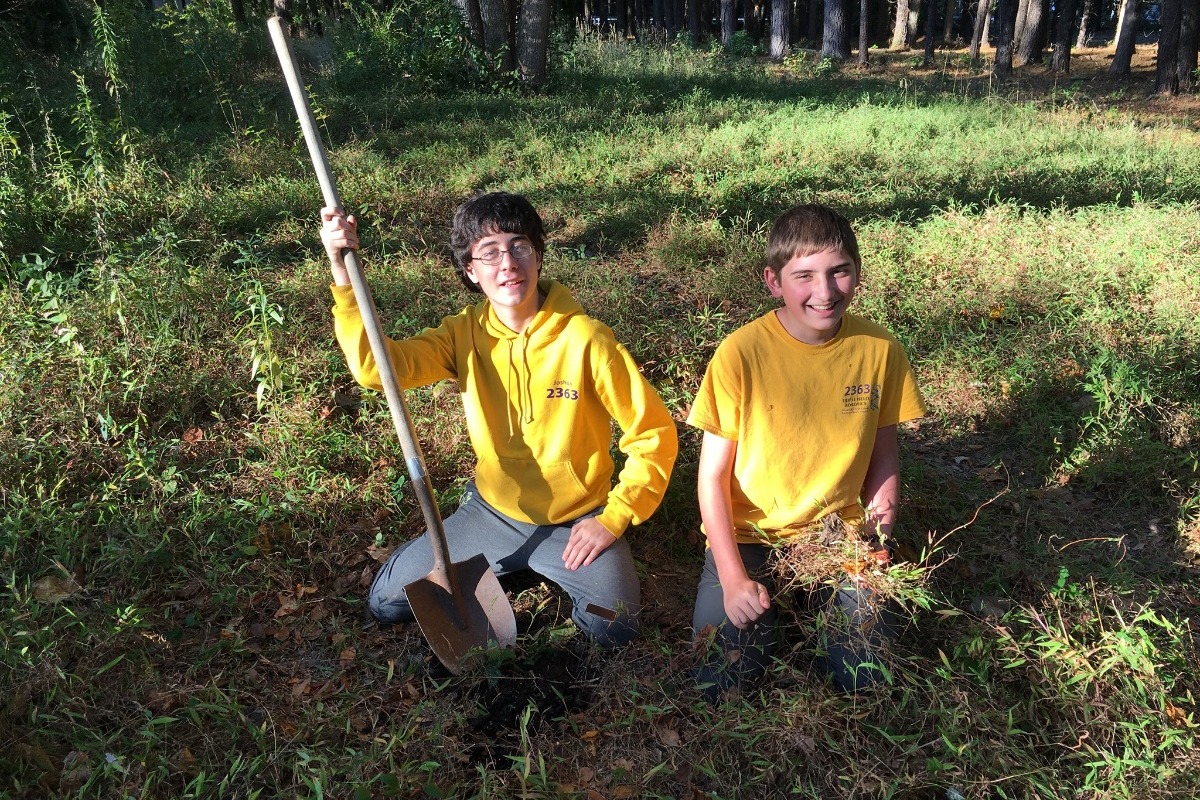 The Bee Byway (beebyway.com) is a pollinator corridor that stretches from Huntington Park to NN Park, and bordered by the James River and Warwick Blvd. What we envision is building large bee habitat waystations every 1/3 of a mile throughout this area. Our goal is to have homeowners be a part of the corridor by planting at least 3 bee friendly plants in their yards that bloom throughout the spring, summer, and fall.

We have established our first site on The Bee Byway on a NN Green Foundation site near Ft. Eustis. 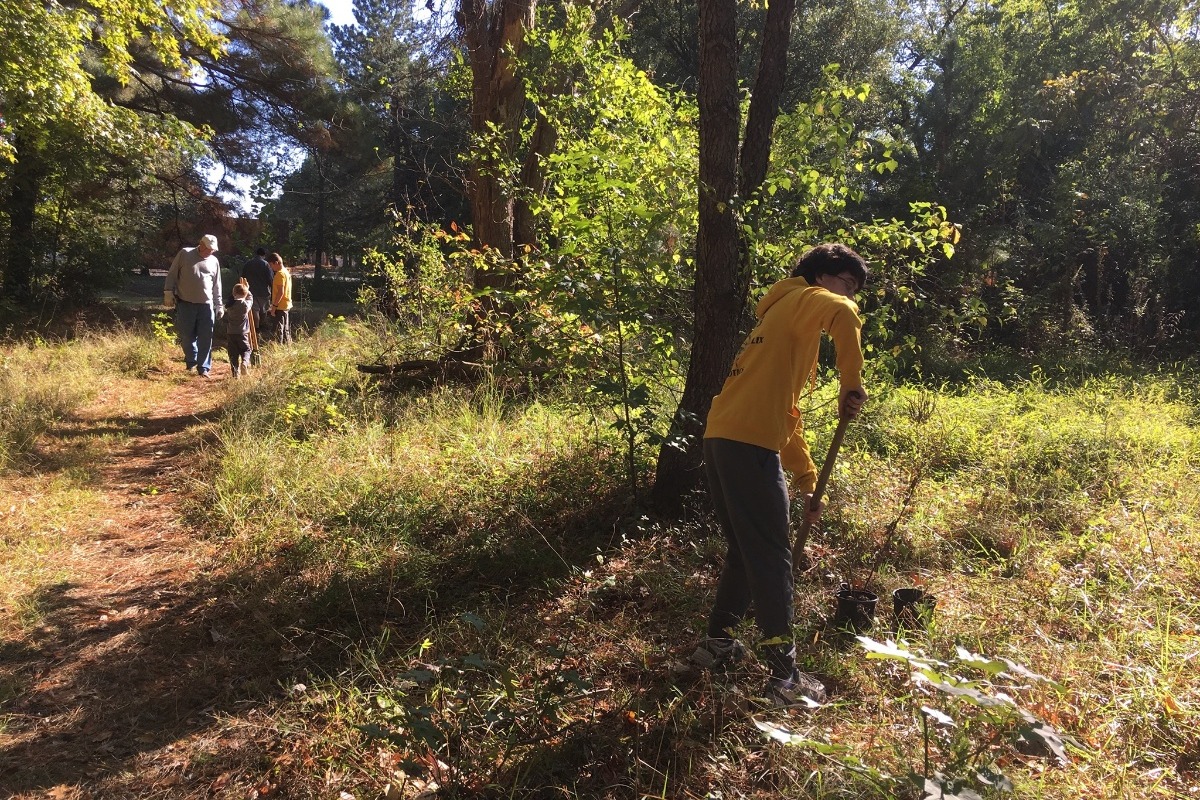 While humans depend on native pollinators, cities often do not design public green spaces to provide all the resources needed to support both the human population and native bees.

Bumble bees are large, chunky bees that have a small surface area to volume ratio which helps them remain warm in cold environments. They can thermoregulate by buzzing their wings to generate body heat, which allows them to  perform critical pollination services for our gardens earlier in the spring, later in the fall, and can forage earlier in the day and later into the evening. However, thermoregulation comes at a huge energy cost to bumble bees, which means they need an abundant food supply close to their nests to survive in the spring and fall.

There are 14 species of bumble bees in Virginia. All bumble bees have a univoltine life cycle which means they generally produce one generation per year.  Bumble bee queens rely on areas that are unmowed or bare patches of dirt to overwinter by digging small holes a few inches into the ground.  During the early spring, the queen emerges to to forage for food to feed her brood on her own. For the new queens, the location of the nesting site is crucial to the survival of the colony. In the spring, when new queens choose a nesting site, they need a continuous bloom of spring, summer, and fall flowers within a 1/3 of a mile radius around the site, otherwise the nest will starve (“The Life and Death of the Queen Bumblebee,” University of Cambridge, 23 Sept. 2015).Bees pollinate 85% of all crops and 35% of all food production depends indirectly on bee pollination. However, native bee populations are especially vulnerable to urbanization because the way humans develop land destroys habitat needed by native pollinators and leaves them small, isolated patches of disconnected habitat. Urbanization  leads to fragmentation of natural habitat. Fragmentation occurs when pockets of green spaces become isolated from each other because they are surrounded by urban development. These spaces act as ecological sinks, trapping animals and plants because urban development acts as a barrier to their dispersal to other green spaces. Isolated populations of wild species cannot grow because the urban green spaces do not have enough resources to support that growth (Ahmé et al, 2009).Researchers at the University of California, Berkeley, made an important discovery on the impact of urbanization on bumble bee genetics. Researchers sampled the DNA in wild populations of bumble bees and found that there was less shared genetic material between fragmented populations of bumble bees in cities with more than 50% impervious surfaces. This means that when nests are isolated from each other, bumble bee queens do not interbreed with males from their own nests and because they cannot find suitable mates from other nests nearby, they do not reproduce at all (Jha and Kremen 2013). This study found that the most important factor of bumble bee reproduction is dispersal, or the ability of the new queens to find non-related males from nests near their natal nests (Jha and Kremen, 2013).Solution Design:How do we solve these problems? We met with Hank Morrison, the Norfolk City Planner. He told us about a concept within the biophilic cities movement called connectivity. Connectivity is the solution to fragmentation. Connectivity means purposefully designing public green spaces to connect fragmented habitats with wild corridors. These corridors connect animals and plants to each other and serve as important habitats in their own right. (Noss,2013). We wondered if it would be possible to connect the green spaces in our community to combat habitat loss.  The Berkeley study showed that the best way to solve the problem of fragmentation for bumble bees is to connect fragmented habitat with a wildlife corridor (Jha and Kremen, 2012). Bumble bees workers only fly about one-third of a mile from their nests to forage. This distance is their preferred range because the farther they travel the more energy they expend. Bees that forage at the top of their ideal range must consume more of the pollen and nectar they gather instead of bringing it home to support their colony. The Berkeley study found that next season’s bumble bee populations were directly correlated to the amount of flowers workers were able to visit during the previous season (Jha and Kremen, 2012). The study also suggested that if a corridor was created to connect fragmented habitat, bumble bee populations would rebound within a few years (Jha and Kremen, 2012).The Bee Byway is a pollinator corridor in NN, VA. that connects all the isolated pockets of existing bumble bee habitat in existing wild spaces from Huntington Park to NN Park and between Warwick Blvd. and the James River. We chose this area of the city because it was the least fragmented by the city’s major roadways. The Bee Byway will add floral resources and bolster bee habitat in public and private green spaces to guarantee suitable habitat every one-third of a mile along this corridor.Each waypoint contains three things:

1. 27 bee-friendly plants that bloom continuously throughout the spring, summer, and fall.2. Wild areas for native bees to nest3. A place for native bees to overwinter We have identified 52 sites on The Bee Byway. Fifteen of these sites are already existing native bee habitat, 37 are potential waypoints, and we are looking to add more to the corridor.We are planning to buy 2″ plugs from North Creek Nursery for $1.25 each. Each site will cost approximately $45 (we will be planting 36 plants at each site to account for a 25% plug  mortality). The total cost for planting The Bee Byway (36 sites) will be approximately $1600 (plus GoFundMe fees).We are in the process of applying for environmental grants to help cover this cost, but we anticipate that they will not cover the entire cost and it is not a guarantee that we will be given these grants. Our GoFundMe campaign will go to help cover the cost of the plants for these sites. Any extra money will go towards producing official signs for The Bee Byway.We have received huge community support for our project and we are so grateful for all the help! We want everyone to BEEcome a part of The Bee Byway!

Donate to The Bee Byway